This has been the busiest fall season since college, and I’m pretty much grasping at anything that keeps me sane. Cooking has always been one of those things, and with my schedule these days, I really relish the rare opportunity to cook myself a proper meal. Grocery store prepackaged/chopped vegetables always perplex me because I find the act of preparing my meal so cathartic. So here’s my little lesson for fully appreciating a night on my own…

1. Remove all restrictive and otherwise uncomfortable garments. Ideally, you’ll just don your pajamas at this point–it’ll save you time later, and no one will see you in your yummy sushi pajamas anyway. (That was a Buffy reference for those of you that are paying attention).

2. Get your apron on. If you do not own an adorable apron, immediately go out and purchase one.

3. Pour yourself a nice big glass of wine. Refill when required.

4. Start chopping! I had a lot of random veggies to use up, so I did an easy sauté with a mix of yellow peppers, mushrooms, zucchini, carrots, tomatoes and garlic.

5. Round out your cooked veggies with spices, S&P, and a grain of some sort (I had red quinoa prepared in the fridge already), and top with a few poached eggs (made with these poachpods) for some protein. Refrain from making boob jokes. 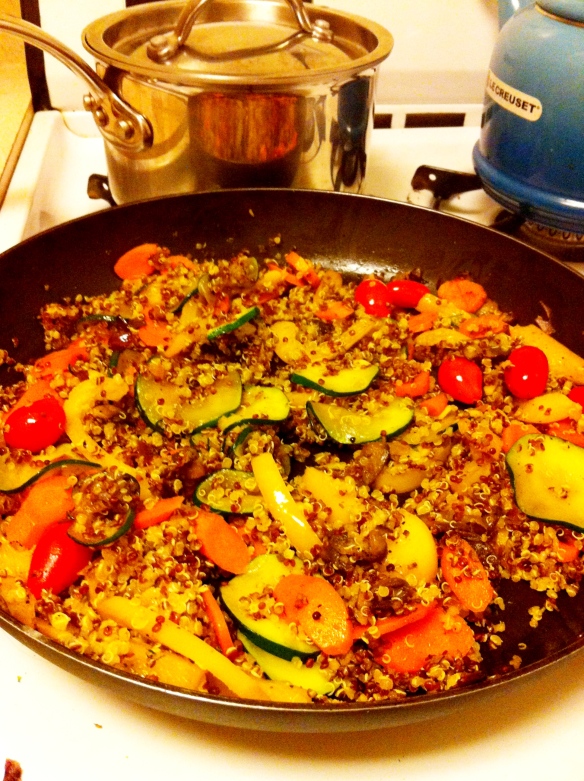 6. Refill your wine and settle down to watch ______ (fill in the blank). Something trashy is always good, but you could be really ambitious and watch a documentary to feel smart.

7. Now, this is important. EAT DESSERT. You deserve ice cream. But not only ice cream–the best ice cream on the face of the planet.

8. Revel in how awesome that was. Pencil in another date with yourself for next week. Same time, same place.

My vacation was coming to a close, and my wallet was hurting just a bit. Luckily, we had planned a trip to the farm for my last full day in New York. As much as I love dining out, there is an extraordinary amount of value and appeal to picking out ingredients and building a meal from scratch in your own home. Even better? Traveling directly to the source of your food, talking with those that have grown or raised it, and selecting the best specimens from an array of fresh, local foods. Others write much more eloquently than I on the value of slow, local, organic, biodynamic, etc etc. I don’t feel qualified to comment on such a socially-complex and politically-charged arena, but I do know that I, as a consumer, am thoroughly enamored of the idea and, ultimately, my luxury in choosing locally-sourced food literally at the farm where it was grown. 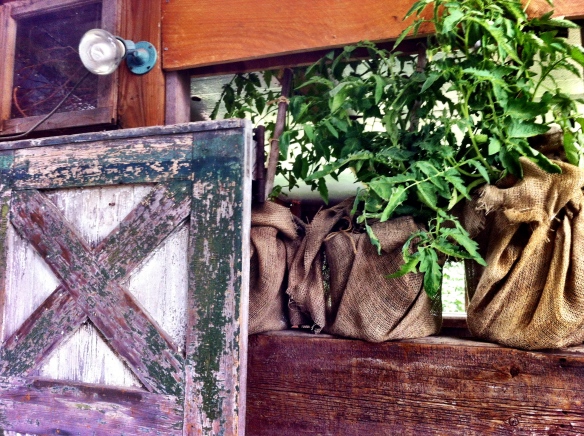 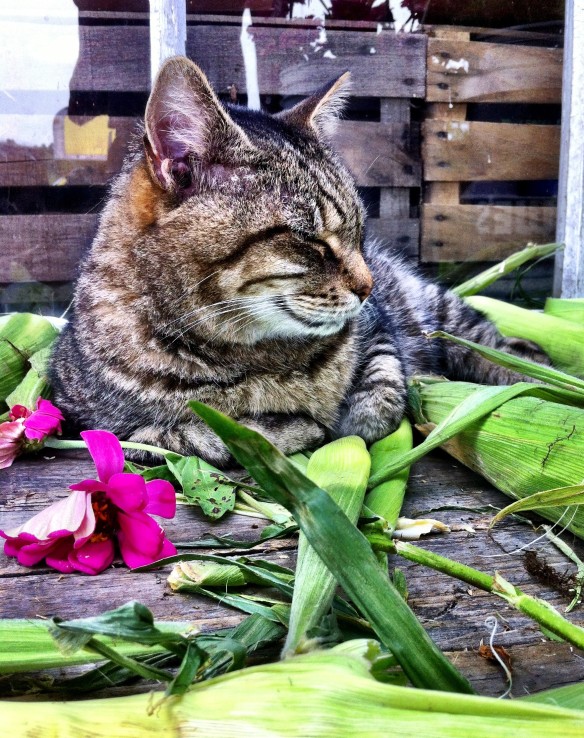 Dane, Nolan and I had a laughably easy, and beautiful, commute out of the city to Blooming Hill Farm—only about an hour away. Blooming Hill is not just a fantastic farm; it represents a truly inspired business model. The on-site shop caters to hip New Yorkers—it’s just rustic enough to seem authentic (the feral cats sleeping in the pile of corn were legitimate), but it has been meticulously designed with subtle touches of “barn-chic.” Vintage milk bottles are lined up behind the prepared foods counter, and reclaimed barn doors provide structure and a bucolic aesthetic. It was well done–visually stunning. 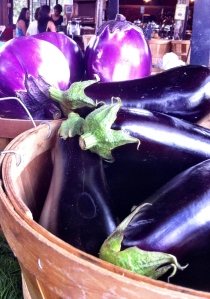 Lining the tables are fresh, ripe and almost ridiculously gorgeous examples of the farm’s produce. An entire table is devoted to fresh herbs—a lush forest that borders crates of deep purple plums and yellow peaches. Bunches of garlic hang from the ceiling, and the gigantic faces of sunflowers cheerfully smile at you while you pick out the perfect kale and heirloom tomatoes.

The trip would not have been complete without an order at the small in-house restaurant; we ordered both the red and white pizza—tomato, mozzarella and basil, and homemade ricotta, fennel and roasted garlic, respectively. One may not expect delicious pizza from a farm, but the freshness of the ingredients made for some damn good eating. 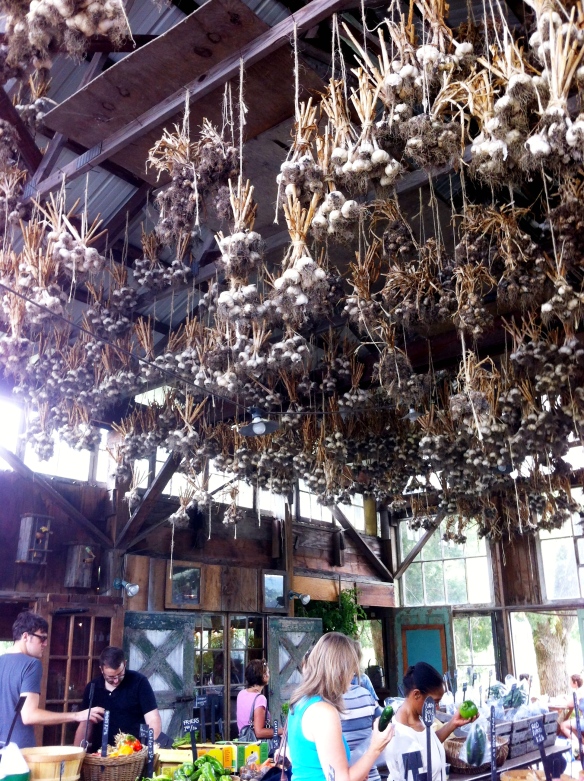 It was not until we returned to the car with our bounty that we started discussing what kind of dishes we would prepare. We had picked out beautiful food, and we wanted to let the ingredients determine our meal. It was decided that we would visit a new butchery on the upper West Side for a perfect slab of ribeye to complement the produce that we had collected. We were not disappointed with Harlem Shambles Butchery, and the bowtie-clad butchers (the art of butchery seems to have gone a bit rogue) chose for us the most perfect cut of meat.

After procuring a few bottles of wine and gin to accompany the meal, we returned to Dane’s apartment. With the ribeye (quickly seared on both sides, just enough to leave a deep pink center) as our main, we decided to roast sweet purple, orange and white carrots with herbs in a cast-iron pan, throw together a reduced kale salad with pecorino, and slice the fat, colorful heirlooms tomatoes to serve with purple basil and a bit of sea salt. After Nolan and I were caught munching on a particular blue cheese we found in the fridge, Dane quickly commandeered it to create a blue cheese butter to accompany the ribeye. 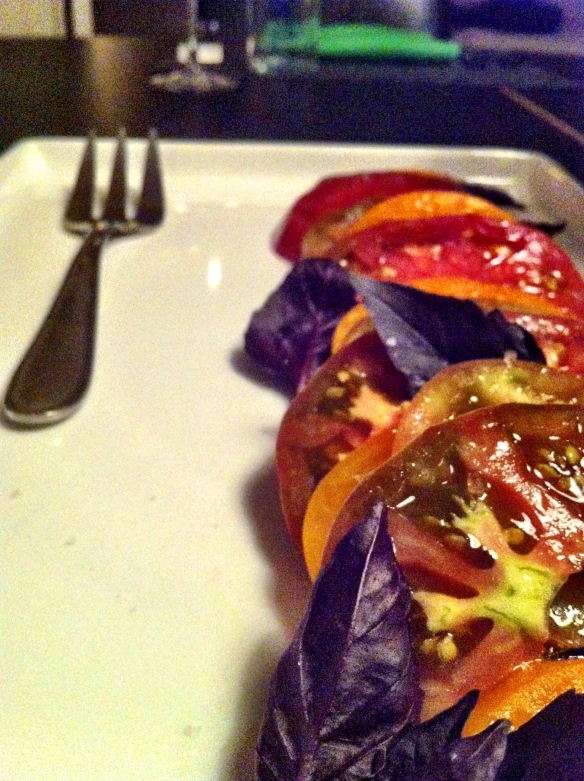 A few gin and tonics, and a couple glasses of wine later, we had laid out the meal. I can only say that though each dish was deceptively simple, the outrageously flavorful ingredients made each dish really luxurious and wildly appetizing. Dane, as always, did most of the cooking, but I made a minor contribution in the form of dessert. We had chosen some midnight blue plums at the farm, and a quick combination of lemon juice, raw sugar and cinnamon with the sliced plums delivered a perfectly tart and sweet plum compote to top vanilla ice cream. One should never skip dessert.

The morning after, I made the trek back to DC. Spying the pathetically empty fridge, I promptly went out to purchase a microwave pot-pie for dinner. It’s really all about balance—one day you’re eating a locally sourced meal, meticulously prepared by your faux-chef brother, and the next, you may just be popping a microwave dinner in. Vacation ends, and the real world sets right back in again. 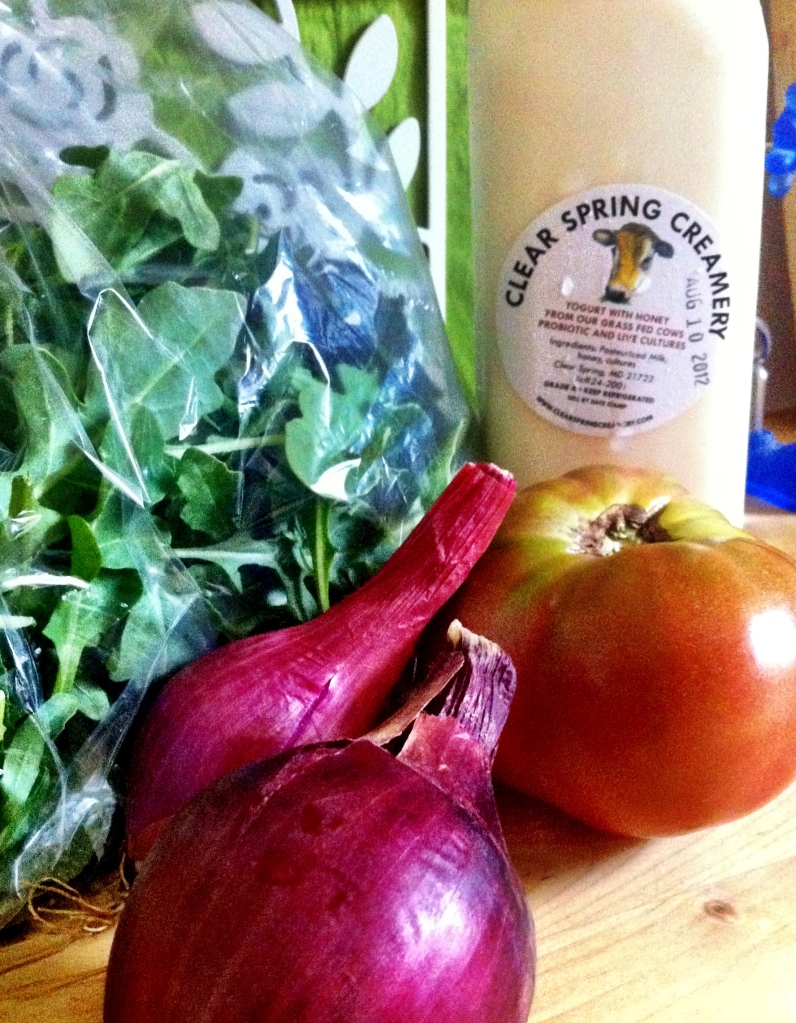 I tend to make a fuss.