We needed to salvage the evening. Four girlfriends out at a DC event, bored out of our skulls by the ramblings of uninvited, awkward, and oblivious boys. We were in danger of drowning our frustration with the overpriced drinks on happy hour, and then where would we be? Nowhere good. But the solution dawned on me. Pizza. What could be better than pizza to sate our appetites and regain some faith in mankind? As three out of the four of us are Adam’s Morgan girls, we headed out to Mellow Mushroom.

As we were handed our menus, the mood couldn’t have been cheerier. We were seated in a gigantic booth (the better to hold the friends and roommates that arrived later), the beer list was pretty exceptional, and we were free of horror that is the club happy hour scene. The elation only grew when I glimpsed the specially-inset menu that described the gluten-free pizza, including the full ingredient list of the gluten-free dough. Although I have no need to order gluten-free, those with an allergy to wheat or suffer from Celiac disease would definitely benefit! 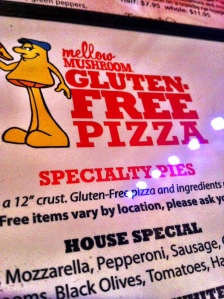 Alas, I did not fare so well. After giving warning of my serious peanut allergy (no problem there!), I also indicated to our waitress that I have an intolerance of corn. Unfortunately, some chefs use a cornmeal dusting on the bottom of pizza dough to prevent it from sticking to the pizza stone or oven. Aware of that tendency, I asked the waitress to check whether the restaurant did this as well. She came back with an unsympathetic, “Sorry, yeah…we, like,…use corn.” Despite my ensuing questions about the feasibility of removing the cornmeal, she was unyielding. Her three trips to the kitchen (by my insistence) did nothing to change the answer. It was in the dough, or something, apparently. Never did I receive a satisfactory answer about why they couldn’t make an exception. However, by this point, my intolerance was becoming a major hindrance to my other dining companions’ enjoyment. I backed down. And I ordered two appetizers to serve as my meal: the bruschetta and the chicken wings. That’s almost like buffalo chicken pizza, right? 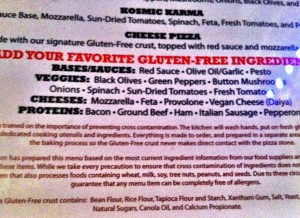 Wrong. After chatting with my group for about 10 minutes, what comes out of the kitchen but my two appetizers?! She sets them before me, and before I could make a peep, she whisks away. OK, now, everyone, listen up. If a person orders two appetizers to serve as their meal, do NOT serve them the appetizers before everyone else gets their food. Eating in front of one’s friends is uncomfortable and downright rude. Got it? Good. 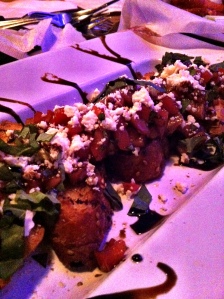 Here’s the most unendurable part: the food itself was pretty terrible. The bruschetta was topped with some lovely fresh tomatoes, but they were literally drowned by the sickly sweet balsamic vinegar. The toast was stale (even all that vinegar couldn’t penetrate it) and tasted mostly of cardboard. The wings were worse: soggy, lukewarm and pitifully mild. The best thing about that dish was the celery. You can’t mess that up too badly, I suppose.

If it weren’t for the peach-infused beer that sustained me until the end of the meal, it would have been a complete disaster. Not only were they completely inflexible about their kitchen practices, but they did not volunteer any information that would have helped me make a better decision about what to eat, or offer any sincere apologies. Unfortunately, instead of regaining my faith in mankind, I lost just a little bit more of it. 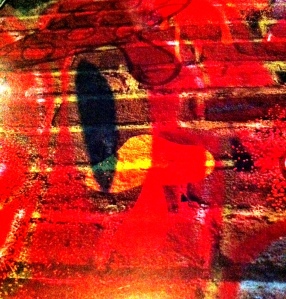 Ok, I admit – that’s a little dramatic. So, to end on a more positive note… Yesterday, I did a bit more digging on Mellow Mushroom, and found that their attitude towards food allergies is relatively progressive. Similar to many national chains, Mellow Mushroom maintains a special allergy grid that documents each dish, and what potential allergens (of the big eight) it contains. You can find that here, but I would still do your due diligence with your waiter, and explain the dangers of cross contamination.

4 thoughts on “A little less mellow, a little more mushroom.”